Andrew DeJohn '01: 'I gained a personable yet critical way of looking at all the people'

My freshman year, I was very undecided about my major and I took The Quest for the Historical Jesus with visiting professor Cynthia Baker.  The class opened me up to a vast amount of information about the world that I was missing out on.  It gave me a whole new way of approaching history, and thinking about my place within it.  I was hooked enough to take RELST 101 with Jane Marie Law the following semester.  That was really my turning point for two reasons.  First, the course exposed to me to a world of human experience different from mine that I just had no idea about up to that point.  There was just something so fundamental about the material and its relationship to the basic pursuits of humanity, regardless of what you personally believe.  Secondly, it was the instructors.  Professor Law was captivating, incisive -- and wouldn't put up with sleeping in class!  I still remember the very first story she told to start the very first class about a person searching for "true" music, and a story about making a "wonky" quilt.  I was lucky enough to have Kim Haines-Eitzen during her first semester at the school for my discussion section.  I grew to admire both, for their intellectual rigor and their personalities I can only describe as a mixture of zen and true concern for their students. Basically, I decided I wanted to be the kind of people they were.   From there I became a College Scholar, and eventually decided to focus on religion.

How did/has your RELST major shaped your experience at Cornell, your plans for the future, or the development of your intellectual interests?

Perhaps the biggest thing I gained from Religious Studies was a personable yet critical way of looking at all the people I meet in my life -- both as individuals and as groups.  'Nothing human is foreign to me' is a saying I first heard in a religious studies course.  But the program also taught me to not stop at that observation -- to appreciate our common humanity, but to also use keen eye to evaluate differences.

The interdisciplinary nature of the program was very beneficial, as you get exposed to a little bit of everything -- history, anthropology, literature, psychology and sociology.  You learn to appreciate the advantages and drawbacks of each discipline.

One of my favorite moments at Cornell was sitting in Jane Marie's office at Rockefeller.  I was trying to decide what to do with my major during a particularly harrowing week of my college years.  I sat a few moments in her very tranquil, incense laden shrine-like office. Professor Law made me tea and made a suggestion: go to the top of the Johnson museum, look out the big glass window, and stare at the expansive blue lake down below.  I did so, and it gave me the moment I needed to step back and look at my decision from a wider perspective.   In reality, I had already made up mind.  I just needed a space that would clear my mind and let me see it.  Good advice!

Did your RELST major influence your career choices?   If so, how?

Religious influenced my career both directly and indirectly.

After Cornell, I studied History of Religions at the famed University of Chicago, no doubt partly due to the great recommendations I received from professors Law and Gold, who are both alumni.  My plan was to become an academic.   But something unexpected happened.

Though I did not realize it at the time, Don Frederickson's course Film and Spiritual Questions (RELST 473) really changed the course of my life when I took it the last semester of senior year.  The last paper I wrote at Cornell was for that class.  The unique tone and openness of the class was one of a kind.  The films we watched really opened me to the world of cinema that was truly mind-blowing.  I had caught film bug--though it lay dormant for a while.  Don's passing was obviously a huge irreplaceable loss.

While at Chicago, I became involved in a student film making group and started spending more time making films than writing papers.  I finished my master’s degree, but then took a year off.  Instead of continuing to a doctoral program, I ended up applying to film school, and have been in that field ever since.  Don Frederickson wrote one of my letters of recommendation.  I had been a religionist who wanted to study film, but became a film maker who wanted to discuss religion.

That brings me to my current career -- writing, producing and directing films and T.V.  I mainly work on documentaries, for channels like History, Discovery and Nat Geo. Even at film school, my background in religious studies led me to pursue topics that had to do with anthropology, history and religion.  Though it seemed like I would never directly use my degree, in an odd circle of coincidence, most of the programs I have worked on have had a strong historical, if not explicitly religious dimension. There have been more than a few times when I have caught people's attention because I had an academic background in religion.  My work has enabled me to travel the world, even shooting in all the nooks and crannies of Jerusalem for an episode about the "God brain."  The paths we are on are not always straight--but somehow we get there!

My own personal project now is developing a documentary and narrative film about my late mother, who was a young nun in the momentous period of the late 1960s.  Incidentally, I wrote a short biography of her for RELST 101 way back when -- another lucky benefit I received from the program.

Finally, if a current Cornell student said to you, “I’m thinking about a Religious Studies major,” what would you say to them?

Go to the top of the Johnson Museum and take a long stare out the window at the lake. Then, double major in Religious Studies and Accounting. 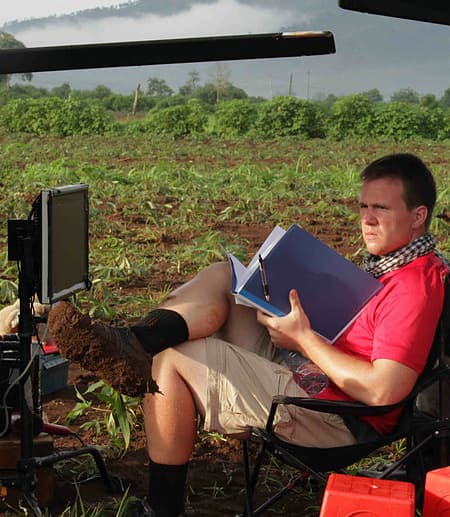